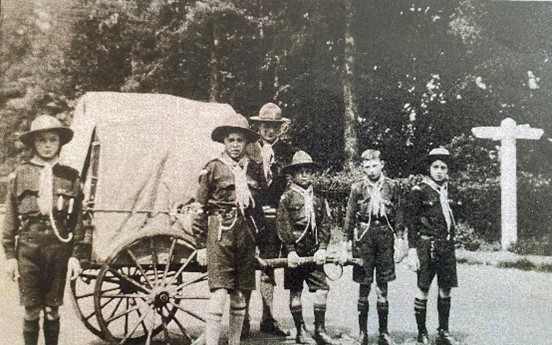 ERIC REED – Scout Master
Eric joined 1st Sunningdale after repeatedly turning up and asking if he could join. It was only when they were taking details for an upcoming camp in Winkfield that they discovered he was only 7!

When he was older, Eric used to work as a farm hand on Coworth Farm 6 days a week, with Sundays off. The farmer was not happy with him taking time out for Scouts. We understand he took over his role from Raymond Jerome as an 18year-old Assistant Scout Master running a Cub pack of 24 on Tuesday evenings, a Scout troop of 14 on Wednesday evenings and 10 Senior Scouts on Friday evenings – all meetings were in the Sandy Lane hut. The Group Scout Leader was Vicar Webster (1942-1959).

The Scouts used to meet at 1pm on Saturdays, load the cart with tents and walk or cycle to Earlywood for overnight campings. GSL Webster always had to be back for 10.00am Church and afterwards went back to Earleywood to decamp. They also camped in Silwood’s grounds, Sunningdale Park, but Mr Morley (?) wasn’t too keen on that as it upset the horses. They also did some overnights at the Recreation Ground. Once a month the Senior Scouts and Scouts would attend Church in uniform and carry the flag to the altar.