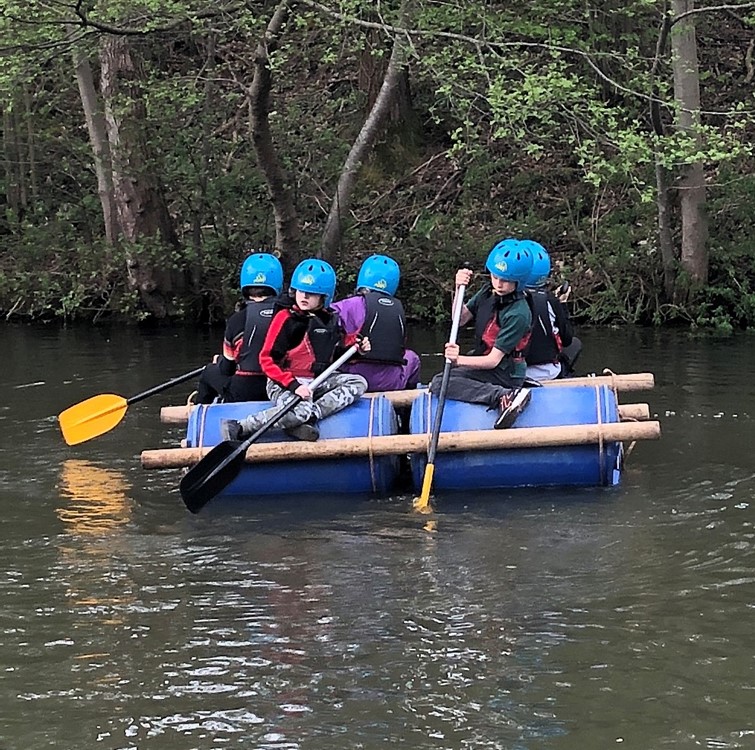 It’s been a very challenging 12 months, going between F2F & virtual meetings, in bubbles but Sarah. Katy and I have managed to still produce a varied programme for the Cubs to enjoy.

Sebastian the Goat joined one of our early Zoom meetings and we had an online cookery session making spring rolls as part of the International badge – absolutely delicious! Hugely popular was Captain Doug Brown’s experience as a pilot with BA and all the different planes he’s flown. Still online, the Cubs made their own family coat of arms and found out all about Sir Edward Henry (who’s buried in South Ascot Churchyard) who invented finger printing and did their own with lead pencils.

Making hideouts and dens at home for sleepovers proved VERY popular throughout lockdown and we had some particularly ghoulish entries at Halloween. At the Survival virtual camp, we have to thank Christian & the Explorers for introducing the Cubs to Bum Sandwiches! Who knew you could “cook” with your bottom!

Earleywood was completely unused throughout lockdown and afterwards rarely booked by other Groups, so we’ve pretty much had it to ourselves. We made mud faces, ideally suited to the Cubs as it was fantastically messy and enormous fun. We’ve also played plenty of dark games, making light photos by waving glow sticks, but to be completely honest, a Cub with a head torch in the pitch dark is always happy. We’ve also had sessions putting up tents. Always tricky when the Cubs are wielding wooden mallets, but they do so love running in & out of the tents when they’re up. The Cubs love having a tug o’ war too and they certainly put their back into it. With the best of 3 pulls, it was very close every time.

Once the restrictions eased, we had a day with the Cubs at Runways End, near Farnborough. The Cubs did some caving, and demonstrated some really great teamwork & support, as a couple of the Cubs were a bit reluctant initially …but together, they all did it in the end. They also did the ever-popular raft building. It’s always fascinating to watch the transition from furious independent paddling (round in circles) to moving the raft in a straight line! The Cubs also had a chance to do another favourite activity, crate stacking. Again it looks easy, but it gets really wobbly when they’re stacked 10 + high…and then it’s the fun of having them knocked away, leaving the Cubs swinging.

We had another day of activities at the Bears Rails campsite in Windsor doing some more traditional Scouting activities. Fire lighting is always a popular activity with the Cubs…shame the day at Bears Rails was one of the hottest days of the year! We had several team activities, including the team skis. Something else which always looks easy but needs great teamwork and coordination…. otherwise, the skis get further and further apart. An activity which will probably come as a massive surprise to the Mums and Dads is washing up the old-fashioned way (which we have to do at camp) – and the Cubs absolutely love it! It was great the Explorers were able to join us, as they built rafts and entertained the Cubs by “racing” them across the Bears Rails’ pond.
And finally we were absolutely delighted to be able to go back to Swinley Forest to build shelters. Always popular with the Cubs and Leaders as we do enjoy “testing” for build quality. Can the shelter keep ALL the Cubs inside dry when it “rains” !!!! Hmmm…not always!

It’s been an interesting year and the Cubs have been super enthusiastic and full of energy throughout enjoying mess & mayhem, learning new skills, and earning LOTS of badges. As ever huge thanks to everyone who help make Cubs happen every week… especially to Elliott Shooter who as with us in 2020 for his Gold D of E, Linda Wood for managing all the badges and Clare Warren for managing the waiting lists and moving the young people between the sections and of course to Sarah Targett and Katy Ingram, my fellow leaders and without whom Cubs would not possible.

Thank you all very much
Hilary Crofton